all the latest Buzz 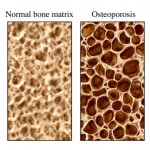 By Allan Lawry
Allan Lawry is a Lifestyle Coach & Fitness Trainer in Vancouver, BC and author of www.alfitness.ca
More under Healthy Bones

Beware of Bisphosphonate drugs which are prescribed to increase bone density. The initial results of this drug therapy look good, as often the bone density will go up after one year. The problem is that this bone is old, dry, brittle and not new strong bone matrix. Drug companies use these first year results only and make them sound like their product is helping when actually these drugs contribute to weaker bones.

These drugs slow down or destroy the ‘old bone’ removing abilities of the osteoclasts. This causes the old brittle bone to build up which eventually begins to weaken and crumble! Osteoblasts (hole fillers) have fewer holes to fill, less work to perform, and their abilities begin to deteriorate when osteoclasts (hole makers) are not functioning. The process accelerates after two to three years, and bone loss after five years can lead to fractures of the femur and other large bones. For the past seven years, my experience with the effects of various “bone density increasing” drugs has proven to be disastrous. We have records of clients whose bone loss was due to the action of drugs that were prescribed to prevent bone loss!

A new 56 year old female client had an initial T score of -2.2, which is quite low. She was prescribed Alendronate (brand name: Fosamax) and went for a second scan one year later. Her score had dropped to -2.9. A third scan after three years revealed a score of – 3.1! Her physician had tried two different drugs and changed the dosage three times in an unsuccessful attempt to stop her bone loss.

It is unfortunate that these drugs are being prescribed to treat a symptom called Osteoporosis in Canada and the United States. The term has now been raised to the status of a “disease”, in much of the newest medical literature, which I believe is a misguided description.

The condition is actually a short term healing mechanism that did not receive enough assistance from its owner and has turned into a longer term health problem. The body, in its wisdom, will take calcium and minerals from the bones and deliver it to an area that requires it as a high priority. The bones are storehouses for minerals and the body will draw on these reserves in times of need, or when it is out of balance. The bones must be replenished otherwise unhealthy, weak or porous bones become the consequence.

It is challenging to realize that “modern medicine” has not yet discovered the root causes of porous or weakened bone and the natural ways to stop and reverse it. As mentioned, Osteoporosis is just a word that describes the long term consequences of a short term healing process. The medical establishment promotes the word, but offers little for natural ways to treat the root causes. The first line treatment they are recommending is bisphosphonates.

There are currently a number of lawsuits in motion against the companies that produce these drugs, especially Fosamax, as it has been linked to Osteonecrosis. This is “osteoporosis” of the jaw, also known as “dead jaw”. Merck, the company selling the drug Fosamax, set aside over 40 million dollars years ago evidently to fight these lawsuits.

Maybe they knew something we didn’t…